You are here: Home / Library / Gone Too Far (Cole Hutchinson) 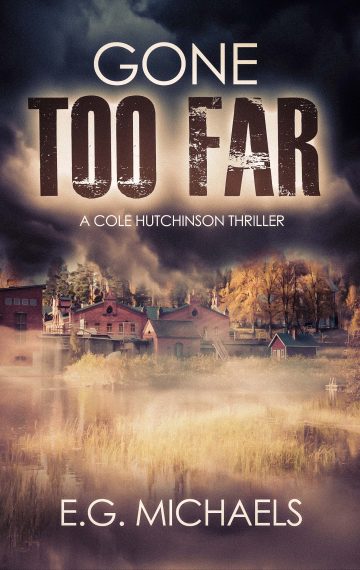 As Hutch starts digging, the body count starts to rise. Walking away would be easy but Hutch isn’t about to let someone get away with murder. It’s up to Hutch to discover what really happened in Ashcroft, a small town where the lines between good and bad aren’t always clear and the bad guys have already gone too far.

E.G. Michaels on “Gone Too Far”

“Gone Too Far” is my first standalone novel and it introduces former Philadelphia cop Cole “Hutch” Hutchinson. My previous five books were a series featuring Philadelphia Homicide Detective Kyle Simmons. “Gone Too Far” shares some similarities to the Simmons series, in that there is always a crime which needs to be solved, and the fight scenes are fast-paced events filled with martial arts and gun-play. There are also moments of humor, however not as frequent as the Simmons series.
But “Gone Too Far” also has some distinct differences which make Hutch a different character than Simmons.

In “Gone Too Far” Hutch has recently been forced into retirement due an eye injury suffered while on the job. It was not the type of decision he would have made on his own because he doesn’t feel the injury was severe enough to end his career as a cop.

As part of my early research, I interviewed an active Philadelphia Police Officer to get a very clear idea of what type of injuries in the line of duty could force a medical retirement even though the injury itself may not limit the person from doing most of what “ordinary” people do every day.

Back to “Gone Too Far”. Since Hutch was forced to retire from the career he absolutely loved, this story finds him feeling a bit bitter and cynical towards the world. He doesn’t suffer fools gladly, and he’s slow to trust others until they have proven themselves worthy of his trust. Having said that, Hutch is naturally warm to women, children, and older people, and he’s the type of person who will always look to step in and help those in need.

Since Hutch is no longer a cop, he doesn’t have access to the tools and technology which many law enforcement members use to solve crimes. Instead, Hutch’s crime solving shifts towards using more traditional investigation methods. As the reader, you have a front row seat as Hutch starts to work the case on what happened to the Klines and figure out once and for all if she is indeed the sister he never knew he had.

In the Simmons series, there are times where the reader gets a brief glimpse into Kyle’s love and sex life. In Gone Too Far, there are several sex scenes which are a bit more in-depth but still try to show the passion and bond between emotionally connected lovers. My intent was to present these scenes in a respectful manner and based on feedback from my female editors and my beta readers, the consensus is that I was successful in that regard.

“Gone Too Far” is a nice blend of thriller, mystery, and vigilante fiction and I had an absolute blast writing it. There are characters who aren’t talking to or cooperating with Hutch, but you won’t know why until later in the story when the powerful reasons that have forced their silence are revealed. You may have a hunch early on who committed the crimes, but you likely won’t know why until nearly the end of the story. No hints — you’ll have to read “Gone Too Far” to find out. — E.G. Michaels