You are here: Home / Library / Every Minute Counts: (A Kyle Simmons Thriller – Book 5) 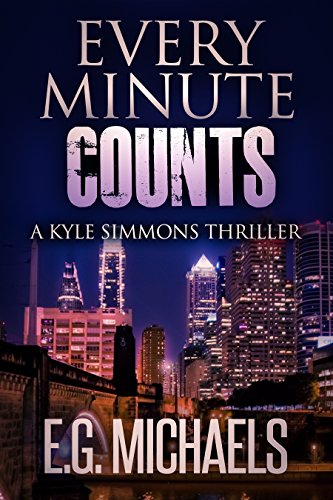 Maria Martinez, The Philly Sniper, has somehow managed to escape from a maximum security prison and is picking up her previous bloody rampage once again.

The state and local authorities claim they can capture her without the help of the one man who previously took down Martinez. That man, Philadelphia Homicide Detective Kyle Simmons, is cooling his heels at home on a politically-driven suspension.

But everything changes when the mayor’s fiancée becomes Martinez’ latest victim.

The suspension is immediately lifted and the Mayor gives Simmons one mandate: Bring in Maria Martinez dead or alive by any means necessary.

It doesn’t take long until Simmons realizes he’s chasing a killer that has somehow gained help to pull off her twisted game of revenge. As the victims multiply and the stakes grow higher, Simmons realizes every minute counts when you’re trying to stop a mass murderer who has absolutely nothing to lose.

** This book follows “Time’s Up” but may be read of out order.

“…That urgency and the way in which the killer always seems to be one step ahead of the detectives make this a compelling book which is hard to put down.” – Dawn Knight

“…The book was fast moving and had lots of unexpected twists, keeping me on the edge of my seat—not to mention up half the night!–because I just couldn’t put it down, and there were unexpected curves that kept me guessing right up until the end. If you’re looking for a good Kindle read to take with you to the beach, this is a sure thing. I give it 5 stars, and a big thanks to Mr. Michaels for another great story.” – Pat Bernasconi