I’m pleased to announce my new book, “The Wretched” has been officially released.

Here’s where you’ll find “The Wretched” on Amazon:

Since this is the first book in a new series, I want to reward my loyal readers by temporarily lowering the price to $0.99. For less than a buck (or free with your Kindle Unlimited membership) you can get started with this series – perfect for your weekend or New Year’s reading pleasure.

But don’t delay because this book won’t stay at this new release price for long.

In case you missed the blurb for “The Wretched”, here it is:

Early fall. A top-secret research project goes terribly wrong. A new species, the Reapers, are unleashed onto the unsuspecting citizens of Philadelphia and soon the rest of the country. The Reapers are stronger, faster, and have no mercy for any humans who have the misfortune of crossing their paths.

Philadelphia Cop Malcolm Foster quickly discovers a routine disturbance call is anything but ordinary. Foster soon finds himself scrambling to survive, gather together a rag-tag group of survivors, and get them out of the city. As Foster and his group fight to escape the city and find a Reaper-free sanctuary, a looming question prevails.

Can anyone stop the Reapers from taking over the world? This is the story of the Wretched, a rag-tag group of survivors who may be the only ones that can keep the human race from becoming extinct.

It’s E.G. with some quick news, along with some book recommendations.

Without further ado, let’s get onto the news…

My next book, “The Wretched”, is back from my proofreader and is now available for a special pre-order price of $0.99.

“The Wretched” will officially release on December 27th and the price will go up shortly thereafter to the planned regular price of $2.99.

In my last email, I mentioned that I was accepting new members for my Post-Apoc Street Team. If you’re not familiar with what a street team does and how it works, you can get the full scoop here:

After that, I’m cutting off new member acceptance until sometime in 2019. This allows me to ensure each team member gets the promised Advanced Reader Copy (ARC) of my book 2-3 weeks before it’s official release date.

Some Recommended Books For You…

Several author friends of mine have recently released new books.

My first recommendation is the latest book, “Affliction”, in Tom Abrahams’ The Alt Apocalypse series.

This series features the same core characters in each complete story. But every standalone book puts them into a new alternate apocalypse situation like a nuclear holocaust, an earthquake, a flood, a wildfire, a hurricane, a plague, and even zombies.

My second recommendation is “Run Like the Wind: A Post-Apocalyptic Thriller” (book 3 of The SHTF Series). L.L.’s series offers up a fast-paced, end of the world thriller that I think you’ll enjoy.

Last but not least is my friend Alex C Gates debut novel, The Demon of Decay.

I’m nearly finished reading this book now and it’s really reminding me of an old-school Stephen King style horror novel. He’s definitely on a short list of new authors that I’ll be making a point to continue reading their future works.

This E.G. Michaels. It’s been quite awhile since I’ve last posted an update on my website or sent one out.

Contrary to some readers opinions, I am alive and well.

Please accept my apologies for not sending out an email or updating my blog in over a year.

So what have I been working on?

Well, my day job took a major shift earlier in the year. I’ve gone from being a freelance marketing consultant to contract work for one company where I am writing marketing for them full time.

This has really impacted my ability to write fiction because majority of the typing I do every day is marketing work-related.

This has forced me to shift my timeline’s a bit in terms of when I get things done.

But here’s the good news: I have a new post-apocalyptic book to announce.

It’s called “The Wretched” and its the first book in a new series.

“The Wretched” is now available on Amazon for preorder and it will officially go live on December 27th.

Here’s a link to it on Amazon where you can read the book description or place your pre-order:

In late July, Amazon decided to discontinue the Kindle Worlds program. Hundreds of authors, including yours truly, found out by form email that their books were being unpublished by Amazon. Even if they were selling very well – like my novella Operation Freedom was.

Suffice to say, it was not a popular decision… including with yours truly.

Fast forward to the present day.

I’ve rewritten Operation Freedom to better fit within my upcoming book series and it will be re-published sometime in 2019. Same story. Different monsters.

If you have one of the original digital versions of Operation Freedom, then you might have a collector’s item. Or just a really good novella. <grin>

So what am I currently working on?

I’m approximately halfway done Wretched Culling (book two of The Wretched series). I’m also working on a short story that will be in an upcoming anthology. More info on that short story and the anthology in a future post.

From there I haven’t decided what I’ll work on next but that won’t likely be until early 2019. My type-A personality won’t rest until I finish what I’m already writing.

I have a few rough outlines in the works for a Kyle Simmons book and a separate Cole Hutchinson book, but neither one is etched in stone.  I’ll revisit the topic of “what should E.G. write next” at some point in a future post. I value my readers tremendously and writing the types of books you’re looking for is important to me.

P.S. I’ve decided to reopen my street team. Specifically I’m looking for at least 15 readers who are interested in joining the Post-Apoc street team to help with promoting the release of “The Wretched” in late December. You can get the full scoop on how it works by going here: Join E.G.’s Street Team Today

Note: I realize some of my readers only like my Thriller novels. Others only like my Post-Apoc works. For this reason, I try to avoid emailing folks about genre work I’ve written that they aren’t interested in.

It’s also for this reason, that I ask you please make sure you choose the “Post-Apoc Books” on the sign-up form. Otherwise, you will not receive any notice when Advance Reader Copies (ARCs) of “The Wretched” become available.

It’s E.G. Michaels. I’m still very early stage writing my next book, a post-apocalyptic thriller, so I don’t have anything new to share at this time. (For example: I’ve changed the book’s title twice so I can’t even tell you the upcoming book’s name.)

I took a quick glance at the calendar and realized most of the month had already passed without getting this monthly newsletter out my virtual door.

Without further ado, let’s get into this month’s shorter than usual newsletter… 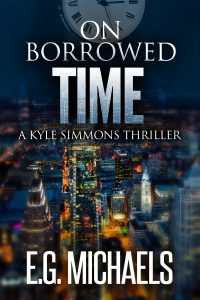 In case you missed last month’s newsletter or recently signed up, the latest Kyle Simmons book, “On Borrowed Time” was officially released on June 27th.

You can get the full scoop or order your copy by going here:

“On Borrowed Time” on Amazon USA

“On Borrowed Time” on Amazon UK

I want to thank the E.G. Michaels Street Team members for helping make “On Borrowed Time” one of my most successful new releases yet.

Rest assured, I’ll be in touch about my next release in the coming months including advanced reader copies. (For more information about my street team and what is involved, please visit this page: http://egmichaels.com/join-e-g-michaels-street-team-today/ )

I have two books I’d like to recommend this month.

My first book recommendation is “21 Hours” by Dustin Stevens. 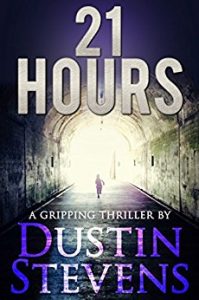 Felix “O” O’Connor is an ex-con who has spent seven years trying to put his past far behind him.

That all changes when his sister and brother-in-law are attacked and their daughter goes missing. Nobody saw a thing and the police are struggling to find clues on his niece’s whereabouts.

In a race against the clock, O’Connor rushes to find his niece before it’s too late.

In my opinion, “21 Hours” starts a little slow but it’s worth sticking with it as the action picks up significantly and story ending is a great one.

My second book recommendation is “Hot Zone” by Steven Konkoly. 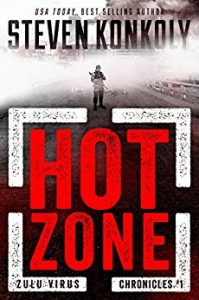 I was fortunate to receive an advanced reader copy of this book and I’m glad that I did.

The best way to describe “Hot Zone” is a fast-paced thriller novel set in the middle of a pandemic outbreak which is quickly getting out of control.

The story follows a group of people from seemingly different backgrounds who will eventually meet and team together.

I’m reluctant to say too much because I don’t want to spoil the story for you.

Rest assured, I give “Hot Zone” two thumbs way up and I’m looking forward to the sequel which is likely to come out this fall.

As I mentioned last month, I’m working on a new post-apocalyptic book series which will be 2-3 books in length. The first two books are outlined and I’m currently writing the first book. More details to come in next month’s newsletter.

I’m pleased to announce a new Kyle Simmons book, “On Borrowed Time” has been officially released.

Here’s where you’ll find “On Borrowed Time” on Amazon:

Since this is the first Simmons book in over a year, I want to reward my loyal readers by temporarily lowering the price to $2.99. In addition, I’ve put the previous book in the series (“Every Minute Counts”) and the first two books in the series (“Before The Clock Strikes” and “The Countdown”) on an Amazon Countdown Deal.

For less than a buck (or free with your Kindle Unlimited membership) you can get started with this series – perfect for your summertime reading pleasure.

But don’t delay because this book won’t stay at this new release price for long and neither will the Countdown deal.

In case you missed the blurb for “On Borrowed Time”, here it is:

A cool night in March. A young couple are murdered in their home while their neighborhood peacefully sleeps. It seems like the perfect crime with nothing but a single word “Tag” written in blood on the wall near one of their bodies.

Philadelphia Homicide Detective Kyle Simmons is tasked with finding their killers but with almost no evidence to work with, he quickly finds himself grasping for clues which might point him towards finding out who the killer might be.

A few days later, another couple is killed. Same perfect crime scene except this time a new phrase, “Tag, You’re It”, has been left on the wall in blood.

As Simmons follows the evidence, he makes to a startling discovery. He’s discovered a deadly game of one-upmanship between two stone cold killers and Philly is just their latest murderous playground.

As the body count start to climb and the stakes get bigger, Simmons is on a mission to stop these killers at any cost. The killers might think they’re going to get away with murder but the truth is they’re only on borrowed time.