The fireworks are finally over (one of my neighbors set them off every night for 8 straight days!) so I’m here with this month’s updates and news worth sharing.

Without further ado, let’s dive in…

Based on numerous reader requests, the “dead tree” version of “The Wretched” is now available.

The print version of Wretched Culling is in the works. I should have more information on it in the coming weeks which I’ll share here or on my Facebook page.

In The Works: “Wretched Culling” On Audio

The amazingly talented Brian Callanan narrated “The Wretched”. I’m pleased to announce that he is heading back in the studio next month to begin narrating “Wretched Culling”.

Tentative release date will likely be late September but I will share more information once we have it.

I am pleased to announce that the next book in the Wretched series, “Wretched Retribution” is now available on Amazon for pre-order.

It will officially release on September 24th. 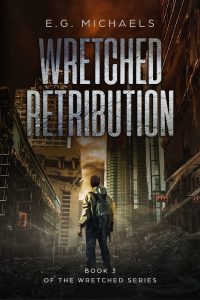