It took overcoming some last minute technical issues but I’m pleased to announce “Gone Too Far” has been officially released.

Since this is my first non-Kyle Simmons book, I want to reward every loyal readers who is willing to give a new type of book a honest and fair read.

That’s why I’ve set the price on this new release at just 99 cents!

For less than a buck (or free with your Kindle Unlimited membership) you can get a great new book – perfect for reading now or in early 2017. If you like Jack Reacher types of thriller books, then you’ll love this book.

But don’t delay because this book won’t stay at this special release price for long.

In case you missed the blurb for “Gone Too Far”, here it is:

What would you do if you got a phone call that your sister had committed murder… but you didn’t have a sibling? 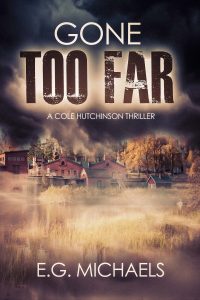 Just how far would you go to find out the truth? When it comes to the truth, former Philadelphia police officer Cole “Hutch” Hutchinson is ready to go as far as it takes to find it.

Here’s where you’ll find “Gone Too Far” on Amazon:

It’s been an absolute blast writing this book and I hope you enjoy reading it just as much as I enjoyed writing it.