If you were wondering when or if I was ever going to write another book, then you’re not alone. Rest assured, I have been working on my next book and I wanted to update you on what exactly that is.

But first, let me explain what part of the delay was…

Shortly after I released “Every Minute Counts” in May, my family and I had to say goodbye to our 11 year old Black Mouth Cur, Abby.

Besides being the resident alpha dog for our family, Abby was the inspiration for several of the dogs like Zeus and Apollo who appear in the Kyle Simmons books.

It wasn’t the first time we’d ever lost a beloved pet. But this is the first time we’ve lost one to a long battle with cancer and the experience really shook up our entire family. For me, I’d sit down to try and write and an hour later, I’d still be staring at a blank screen. Or worse, I’d have written nothing but gibberish.

So I reluctantly took a few weeks away from writing to clear my head and heart.

By late June, my wife and kids were still missing Abby terribly. I didn’t feel we were ready for another dog but they did and I was out-voted 3-1. I’m pleased to report that our house is back to three dogs with the newest family member (a hound-lab mix) quickly establishing her place in my family’s collective hearts and lifting everyone’s spirits massively.

Now let’s talk about what I’ve been writing…

A number of readers have speculated there wouldn’t be any more Kyle Simmons books. That couldn’t be further from the truth.

In July, I starting working on a new Simmons book. I was about seven thousand words into it and realized that the storyline wasn’t strong enough to work for a full novel. So as painful as it might have been to do (and believe me, it wasn’t an easy decision to make), I scrapped that early draft aside and started working on something else instead.

I realized within a few days that this new book was going to be a much better read than the scrapped one and the new story quickly grew.

So if you don’t mind, I’d like to tell you a bit more about my next book, “Gone Too Far”.

“Gone Too Far” introduces a new character, Cole “Hutch” Hutchinson. He’s a former Philadelphia police officer who was forced to take an early retirement after getting injured on the job.

Based on early reader feedback, if you like Lee Child’s Jack Reacher series, then you’ll love this book.

Here’s the book cover and description for it. 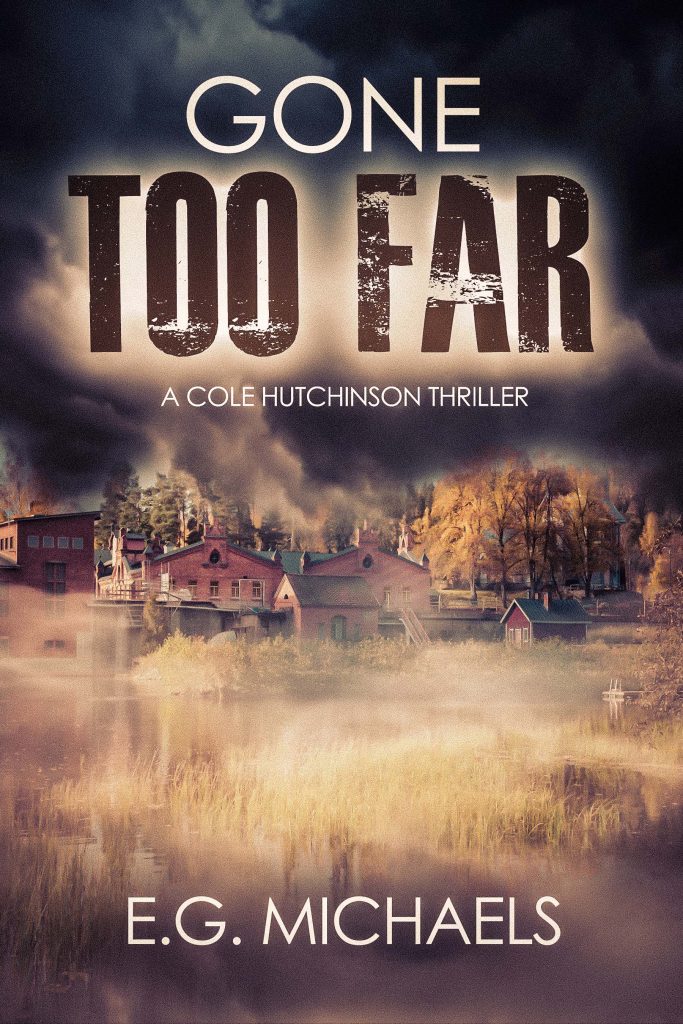 I’ve finished the first two drafts of “Gone Too Far”. I will do at least one more round of revision before sending it off to my editor in the next two weeks.

Barring any unforeseen delays, I anticipate “Gone Too Far” being ready for publication around Christmas. Worst case scenario, I will be releasing it in early January.

So that’s the scoop on the new book.

Here’s what is coming after that…

The novella will be called “Operation Freedom” and it will be released in early February. I will share more details closer to the time. Suffice to say, it will be a fast-paced story like my books frequently tend to be.

“What About Kyle Simmons?”

As I mentioned, the initial work for the next Kyle Simmons book had be tabled because I felt the storyline wasn’t strong enough to be made into a novel.

Writing “Gone Too Far” in between Simmons books has given me a bit of a creative breather from those cast of characters. I still love Simmons, Russo, and the rest of the gang but after writing five consecutive books about them… well, I needed to write about something else for a change.

The result of doing so is what gave me the stronger plot for the next Simmons book and I believe my readers will enjoy a better book as a result.

So yes, there will be another Kyle Simmons book.

The thing is, I don’t like to have too many “works in progress” going at once because it greatly increases the likelihood that nothing gets completed in a timely manner.

Therefore, based on my current planned schedule, I will resume working on the next Simmons book in early February 2017. I’m aiming for a Summer 2017 release date for the next Kyle Simmons book.

Please forgive the virtual mess around my site. Thanks to several hacker attacks which turned my author website into a Chinese shopping site, my hosting company and I have had our collective hands full trying to keep my site unhacked and displaying my books and blog.

It finally took completely wiping everything off the hosting account and starting over from ground zero.

So for the last ten days, I’ve been trying to rebuild this website in my “spare time” and get the site looking the way it’s supposed to be. If you read about a Chinese hacker getting killed in one of my future books, then you’ll know where I got the idea. 🙂

I have some book news to report and I’ll have a longer, more detailed post tomorrow on what I’ve been writing.

Right now, I want to quickly mention that I’ve put Kyle Simmons book #2, “The Countdown” on a special holiday pricing of just $0.99 on Amazon.

Since  the first book, “Before The Clock Strikes”, in the Simmons series is available through Amazon for free, new readers can started with the first two books of this popular series for less than a buck.

Here’s a link to each of those books’ description on this site. There are links to each book on Amazon USA and U.K. on those pages as well:

Before The Clock Strikes: (A Kyle Simmons Thriller – Book 1)

I’ll post a longer update tomorrow for my readers.